MGI is an advertising software platform that helps advertisers efficiently acquire customers via smartphones, computers, connected TV or digital-out-of-home media (DOOH) as well as publishers to efficiently and optimally monetize their advertising space.

MGI has its own games portfolio with more than 5,000 casual games and more than 10 premium games with a total of more than 1 billion registered players. In addition, MGI’s SDKs (Software Development Kits) are integrated into 20,000 apps and reach up to two billion users. This makes MGI one of the largest proprietary first-party data platforms.

MGI is an advertising software platform that helps advertisers efficiently acquire customers via smartphones, computers, connected TV or digital-out-of-home media (DOOH) as well as publishers to efficiently and optimally monetize their advertising space.

MGI has its own games portfolio with more than 5,000 casual games and more than 10 premium games with a total of more than 100 million registered players. In addition, MGI’s SDK’s (Software Development Kits) are integrated into the apps of more than 5,000 publishers and reach up to two billion users. This makes MGI one of the largest proprietary first-party data platforms.

Read more about the M&A Strategy

MGI – Media and Games Invest SE (“MGI”) is an advertising software platform with strong first-party games content. MGI’s main operational presence is in North America and Europe. The Company combines organic growth with value-generating synergetic acquisitions, which has demonstrated continuous strong profitable growth with a revenue CAGR of 77% (2018 –2021). In addition to strong organic growth, MGI has successfully acquired more than 35 companies and assets in the past six years. The acquired assets and companies have been fully integrated and cloud technology is actively used to achieve efficiency gains and competitive advantages. MGI is registered as Societas Europaea in Sweden (registration number 517100-0143) and its shares are listed on Nasdaq First North Premier Growth Market in Stockholm and in the Scale segment of the Frankfurt Stock Exchange. The Company has a secured bond that is listed on Nasdaq Stockholm and on the Frankfurt Stock Exchange Open Market.

MGI is one of a few providers in the Open Internet covering the entire value chain. The advantage of a full stack approach is that all sub-processes between the advertiser who runs an advertising campaigns and the publisher who owns the advertising spaces (i.e. the access to the end user) are integrated in one platform. Therefore no information is lost between different middlemen on the way from the advertiser to the publisher and back again. A full stack approach thus makes the process more transparent and efficient. The resulting improved measurability of campaign success and more targeted identification of appropriate user profiles leads to higher ROI on the part of advertisers, better monetization of advertising space on the part of publishers, as well as more relevant ads for users. While there are a number of other companies specializing in full stack with others trying to follow, MGI is the only full stack provider in the Open Internet that serves all channels – in-app, mobile-web, web, digital-out-of-home and connected TV. 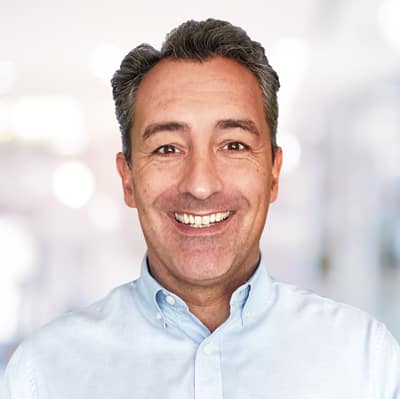 2021 was the first year in which organic growth was almost as strong as our inorganic growth. Operationally, more organic growth projects were launched than ever before in the Company’s history. These include new licensing, content updates, device expansion, internationalization in the games segment, as well as product innovations and the expansion of sales in the media segment. With organic growth of 38% in FY 2021, the investments in organic growth from the previous few years began to show a clearly positive effect. With the acquisition of KingsIsle in the games segment and Smaato in the media segment, two transformative transactions were successfully completed in 2021 that significantly increased the Company’s revenue and profitability. With the acquisitions of Beemray and Match2One, two additional smaller but strategically important acquisitions were completed in the media sector. On the financing side, a capital increase of EUR 90 million was completed, through which international tier-1 and long-only investors were attracted, and the bond volume of the outstanding secured bond was increased to EUR 350 million and placed in several steps. The EUR 25 million unsecured German bond was repaid ahead of schedule in October 2021.

2020 was a year with several M&A transactions and investment in organic growth.  2020 saw more frequent and also larger updates in the games portfolio, more focus on user acquisition for the games (which was also strongly supported by the COVID19 lock-downs) as well as focus on onboarding new customers/ growing the existing customers base on the media side. In January 2020, essentially all assets of the demand platform Verve Wireless Inc. were acquired and in February 2020 the minority shareholders of gamigo were bought out, increasing MGI’s stake in gamigo to 99.9 percent. After the takeover of Verve, it was decided that from then on all media activities would be combined under the umbrella of the Verve Group and all games activities under the umbrella of gamigo Group, which meant that the group structure would henceforth consist of the parent company Media and Games Invest and its two synergetic operating segments Verve Group (media) and gamigo Group (games). During the rest of the year, MGI completed further transactions including the programmatic advertising demand-side specialist Platform161, the remaining minority stake in ReachHero, and Freenet Digital. At the beginning of the fourth quarter, the Company conducted a private placement of shares raising capital of SEK 300 million. The Company’s shares were listed on Nasdaq First North Premier Growth Market on October 06, 2020 in connection with the private placement. In the beginning of November, MGI issued the Initial Bonds and redeemed the outstanding gamigo AG in full on December 10,2020.

2019 had a focus on organic growth and MGI and its subsidiaries executed various acquisitions including WildTangent’s Assets, ReachHero GmbH, AppLift GmbH and Pubnative GmbH. gamigo issued a further EUR 18 million in Bonds with a premium. MGI also executed a Bond Issue of more than EUR 10 million and a capital increase of EUR 9.2 million.

In 2018, Media and Games Invest acquired a majority stake in gamigo AG. With the acquisition, MGI continued implementing gamigo’s “BUY. INTEGRATE. BUILD & IMPROVE” strategy in the Media and Games segment and appointed Remco Westermann as Chairman of the Board. While the focus of gamigo has so far been exclusively on inorganic growth in order to achieve a critical mass, MGI decided to increase the focus on organic growth projects with immediate effect. gamigo issued EUR 32 million in bonds which were listed on Nasdaq Stockholm and FSE. The acquisition of the major assets of US-publisher and game developer Trion Worlds Inc. and signing the Arche-Age License agreement with the developer XL-Games.

(gamigo) gamigo AG repaid its 2013/ 2018 bond issued in 2013 via a term-loan from UniCredit Bank AG and acquired the video and social media specialist Mediakraft to strengthen user acquisition possibilities.

(gamigo) Since user acquisition is the second most important factor for success alongside new qualitative content, gamigo has also placed increased emphasis on media and user acquisition. However, as MGI was not satisfied with its media partners and found a very scattered media landscape (similar to games with many companies that are too small to survive on their own), the Company decided to build its own media segment. With the acquisition of Aeria Games GmbH from the media company ProSiebenSat1 Media SE, gamigo acquired its first media company in addition to an extensive games portfolio.

(gamigo) This period saw the restructuring of gamigo AG – lowering costs, ceasing risky development activities and switching to an M&A model with the aim of achieving critical mass by acquiring companies and assets. For the time being, gamigo is thus focusing exclusively on inorganic growth. gamigo reaches 30 million registered users.

(gamigo) Remco Westermann acquired 100% of the shares in gamigo AG (gaming, founded in 2000), from the German media company Axel Springer. After the acquisition of gamigo AG, the management changed the strategy towards focusing on reaching critical mass, in order to become successful as a games company. Only certain sized games companies have the strength and, especially, the user base to drive a diversified and long-term successful portfolio approach. 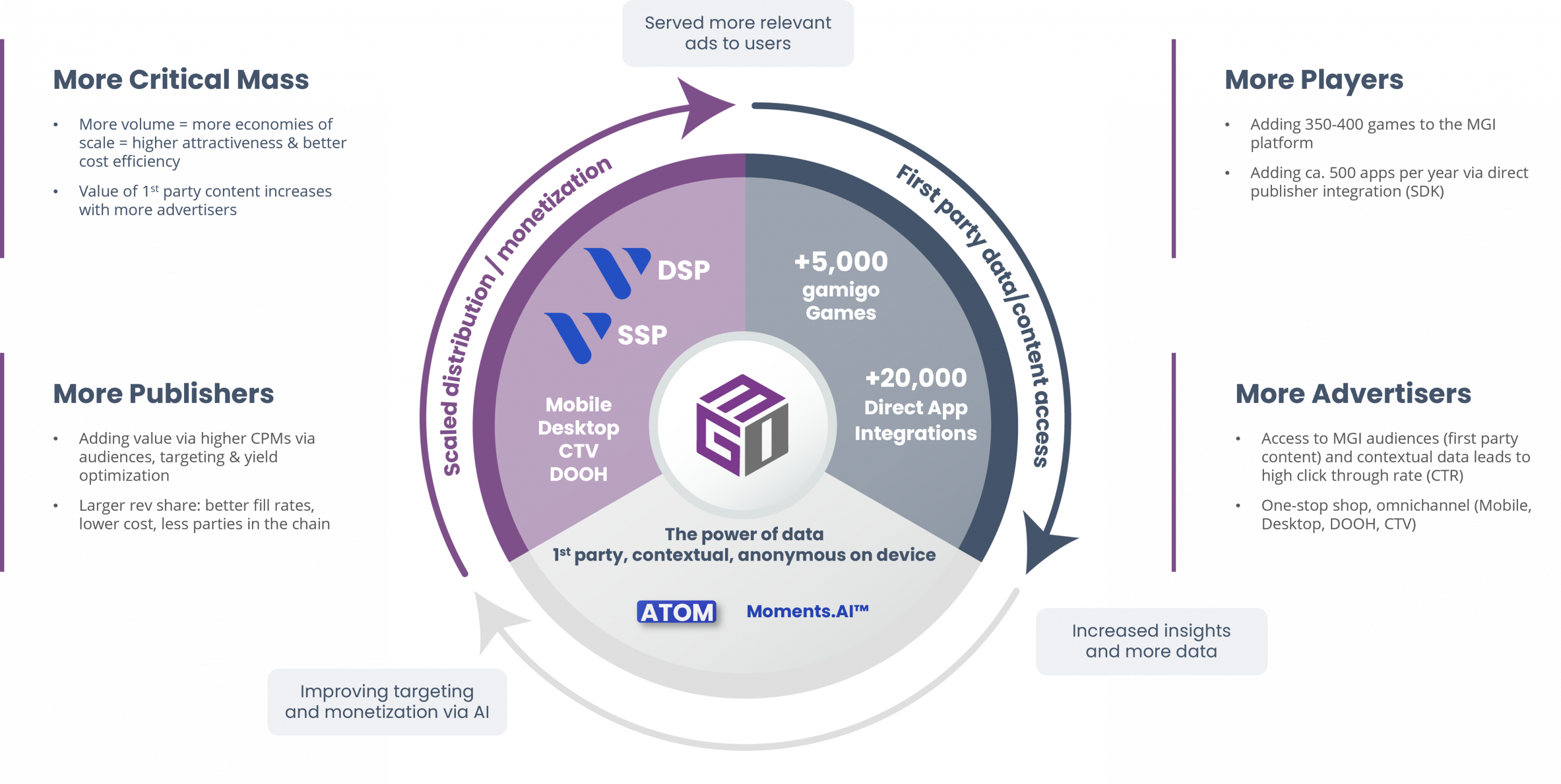 The MGI business model is based on a flywheel that is driven by the software platform synergies between advertising technology and games. This relationship can be further accelerated by both M&A and innovation. In summary, a stronger proprietary games portfolio (meaning a larger audience and more first-party data) will lead to more advertisers using MGI for user acquisition as they can reach a broader audience in a more targeted way (thus increasing the ROI of their user acquisition campaigns). This in turn attracts more publishers who also want to monetize their ad inventory via MGI’s Ad Software Platform, as there is higher demand and as the ability to sell their ad inventory at a higher price (thus increasing their CPMs). The resulting strength in ad software leads to even stronger user acquisition for MGI’s own games, increasing MGI’s owned audience and access to first-party data. M&A and innovation can additionally accelerate the flywheel. For example, in the case of buying a mobile games company, MGI’s audience and access to first-party data would increase significantly. Additionally, by developing a new innovative product like such as ATOM, MGI has the chance to gain additional advertisers and publishers.

Read more about the Flywheel